It is with great excitement that we can announce that we have taken delivery of VINGAREN from PaxOcean Engineering Ltd. Co., Zhuhai. Vingaren was delivered on November 24th, 2020. The Swedish flag was raised the same day and departed from delivery port the next day. 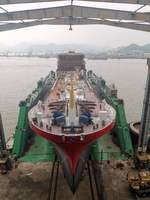 On early morning to Sunday we could live stream the launching of our Vingaren with hull number PX-1100 at PaxOcean in Zhuhai, China. The launching proceeded very well and the vessel is now berthed alongside the yard for further works.

We are pleased to announce that we have employed Kim Kjaer in the role as Technical Superintendent. Kim will also play an important role in the implementation of our terminal management and take part in its daily operation.

It is with great pleasure and anticipation to inform that OljOla Terminals, a subsidiary within the OljOla Group, has been established to manage the daily operation of the new oil terminal currently under construction in Port of Frederikshavn, Denmark.

OljOla participated with a team in the annual futsal tournament hoisted by Rosenhill Seamen's Center. 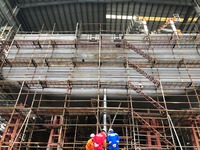 As we look back upon the past year, we would like to acknowledge those who have helped us shape our business. We would like to express our sincere gratitude and give thanks for a great year to our customers, crew and suppliers. Most especially our crew that continues to work day-in and day-out to provide our customers with the best... 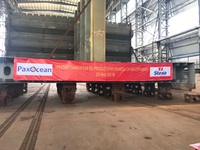 On November 23rd the keel laying of our new building PX-1100 took place. The building process at PaxOcean in Zhuhai, China is underway as design and maker selection is being finalized. 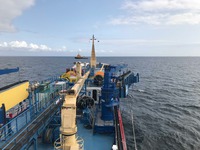 In case of a major oil spill or harmful chemical spill in the Baltic Sea, international assistance from some or all Baltic coastal countries may be needed. The work for coordinated pollution preparedness and response take place within the regional cooperation of HELCOM Baltic Marine Environment Protection Commission.

Next Generation of Bunker Tanker

It is our greatest pleasure to inform that our close cooperation with Stena Oil has resulted in a newbuilding contract with PaxOcean Group in China for an advance 5600 DWT Oil Bunker Tanker. The project is a joint venture involving OljOla as owner with full technical management, Stena Oil as commercial operator and Stena Teknik which will manage... 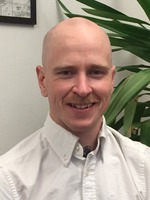 We are very pleased to announce that Emanuel Nilsson have decided to join the family company and will take on the position as our new Technical Coordinator.

We are pleased to announce that we have employed Jens Lind as new QA Coordinator.

SCOPE (Skagerak Chemical Oilspill Pollution Exercise) 2017 is a joint project of the Nordic countries, co-founded by the European Union, and is organized by the Norwegian Coastal Administration (NCA). 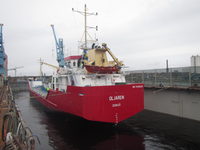 Last week our Oljaren visited Falkvarv in Falkenberg for a periodical dry-docking. The docking proceeded well and the vessel returned into service already after three days from entering the dock. 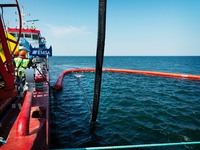 Every year the nordic countries jointly practices together under the Copenhagen agreement to better cooperate in environmental rescue operations at sea. In September they conducted two exercises in Swedish waters. The first exercise is held on Wednesday (2016-09-21) north of Lysekil. 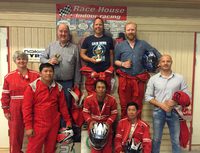 The past week we carried out a oil spill response drill as a part of our commitment with EMSA. During some spare time we decided to go for some go carting. More or less the entire crew together with the shore-based technical team and the EMSA inspector joined the race. At first it seemed to be a close competition but...